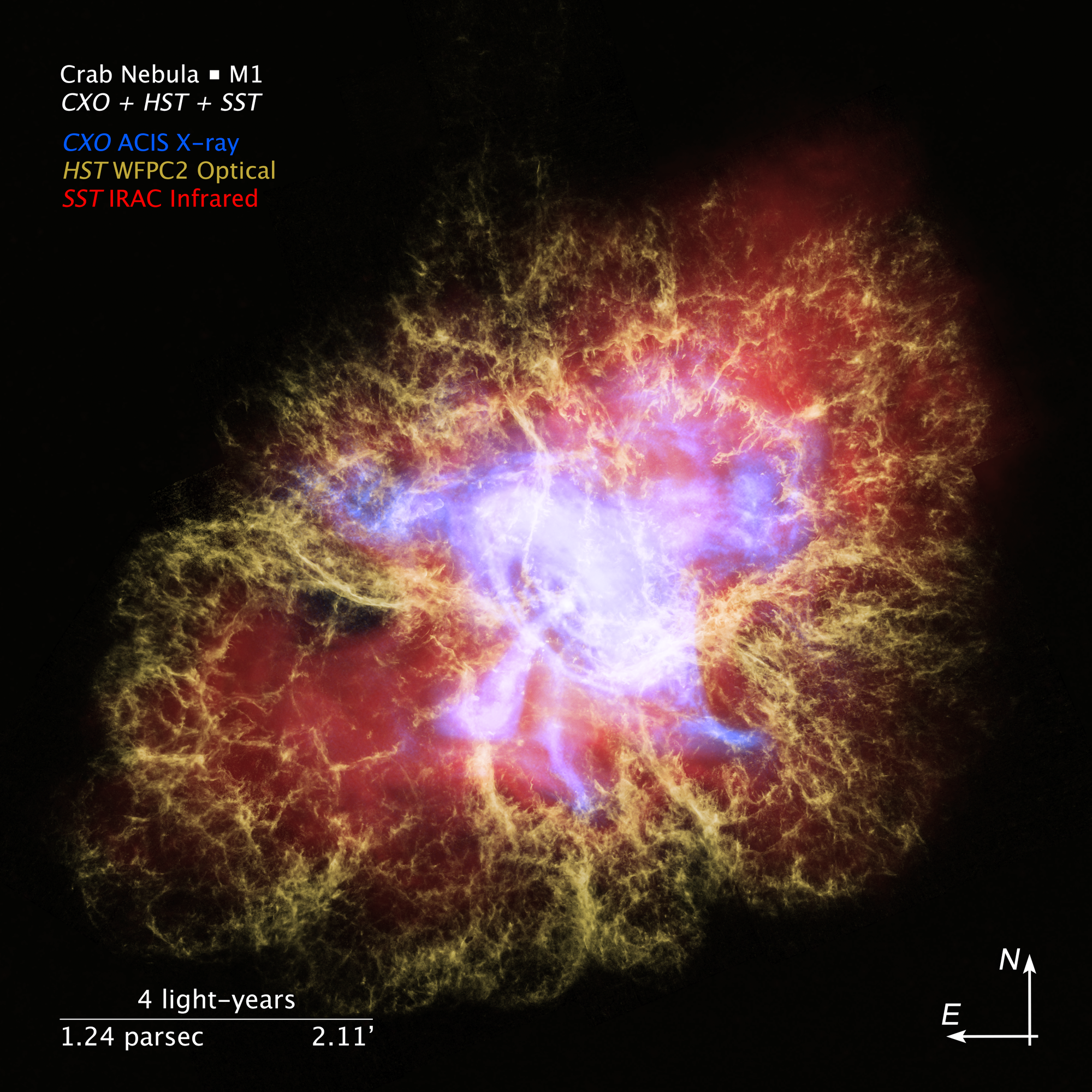 I am interested in supernovae (SNe), the grand explosions marking the death of stars. The photo below is the famous example of a supernova remnant, Crab Nebula, taken by NASA and ESA. It is believed to the remnant of SN 1054, a prototype of electron capture supernova (ECSN), proposed by Professor Ken’ichi Nomoto and others. My major effort has been understanding the origin of this type of SNe and the life of stars before exploding as ECSN.

1) Accretion-induced collapse of white dwarfs: Accretion-induced collapse (AIC) is an alternative pathway for the death of Chandrasekhar mass white dwarfs (WD). The comprehensive study of AIC is lacking compared to the well-known Type Ia supernovae. The potential importance of AIC has recently sparked intensive research on the progenitor evolution, collapse-explosion dynamics, and possible observables. We aim to a) unveil the process from the initial gravitational instability, through the birth of the proto-neutron star (PNS) to the explosion; b) predict the possible gravitational-wave (g-wave) and neutrino (𝝂) radiations from AIC of a suite of progenitor WDs. We also study the possible influence of dark matter on the outcomes of AIC, assuming that the initial WD bears a dark matter core at the center.

2) Evolution of ECSN progenitors: Stars exploding as ECSN are thought to be those high mass end of super asymptotic giant stars with zero-age main-sequence mass 8-10 solar masses assuming solar metallicity. The definite mass range is uncertain due to the complex physics concerned, such as nuclear reaction rates, convective overshooting, rotation, and binary evolution. I would like to improve our understanding by simulating the detailed evolutionary path of these stars with the advanced stellar evolution code MESA, developed by Bill Paxton and coworkers. An example of improvement is updating the electron capturing rates before gravitational instability ensues to the updated experimental results. Now I am trying to improve the treatment of convection in MESA.

3) Collapse or explosion? As the gravitational instability ensues, a nuclear deflagration is ignited in the center of the star. The energy released by the nuclear runaway fusion wishes to disrupt the star entirely, while electron capture in the NSE ashes depletes the degeneracy pressure, favoring collapse to a neutron star. Which process wins is under intensive debate. I perform two-dimensional hydrodynamic simulations, following the subtle competition between nuclear runaway and electron capture. If not getting a decisive answer whether collapse or explosion takes place, I would like to at least inform the community which physical ingredient is most important that we must pay more attention to.

4) Quark matter inside supernova: Strange quark matter was proposed to be the absolute ground state at high baryon chemical potential. It could exist in the center of a cold neutron star or in the hot nascent neutron star produced by a core-collapse supernova (CCSN). The phase transition from nuclear matter to quark matter has been included in one-dimensional CCSN simulations through a delicate equation of states (EOS) constructed from a nuclear matter EOS and some phenomenological quark matter EOSs like the MIT bag model. The result suggested the inclusion of the phase transition helps to explode the stellar envelope and leaves a nascent quark star. We aim to study multidimensional effects for this case and figure out whether g-wave and neutrino signals can help to unveil the phase transition.

I am also interested in other related problems not listed here, such as pre-flame evolution stage and supernova nucleosynthesis.

My advisors are Professor Ming-Chung Chu and Doctor Lap-Ming Lin in CUHK. I also collaborate with Professor Ken’ichi Nomoto and Doctor Shing-Chi Leung in the University of Tokyo. I thank Professor Christian Ott, Matthias Liebendoefer, Evan O’Connor, Frank Timmes, MESA developers and others for their efforts on making many research tools open source, which really helped me a lot. I also put some of my tools on my GitHub though not well documented. I wish they can be used by others.